Twenty-two European refrigeration companies, mostly based in Germany, have signed a statement asserting that the proposed revision of the EU F-gas Regulation can be “implemented without any problems” given the availability of natural refrigerant-based systems “that have been tried and tested for decades.”

The statement (see text below) has been sent to Robert Habeck, Germany’s Vice Chancellor and Federal Minister for Economic Affairs and Climate Action; and Steffi Lemke, Germany’s Federal Minister for the Environment, Nature Conservation, Nuclear Safety and Consumer Protection, according to Professor Michael Kauffeld, one of the signees of the statement. Kauffeld is Director, Steinbeis-Transferzentrum Kälte- und Klimatechnik – ST2K, and part of the faculty of Mechanical Engineering and Mechatronics at the Institute of Refrigeration, Air Conditioning and Environmental Engineering, Karlsruhe, Germany.

Other interested companies can join the statement by emailing  info@cleancoolingcoalition.eu or info@refrigerantsnaturally.org.

The statement points out that in the proposed revision of the EU F-gas Regulation, an HFC quota system would “severely limit the future supply of HFCs to the EU market,” reaching 2.4% of 2015 levels in terms of their potential global warming impact in 2050. The proposal was announced in April by the European Commission (EC), part of the process in the EU that will lead to a revision of the regulation.

The measures in the proposal “make sense and can be implemented without any problems,” the statement said. “After all, there are technologies that have been tried and tested for decades that manage without F-gases.”

The statement went on to say that, over the past decades, the 22 signatory companies “have implemented countless refrigeration systems with natural refrigerants to the complete satisfaction of their respective customers.” These systems are now “state of the art” and offered by many more companies, as seen at the Chillventa trade show in Nuremberg, Germany, in October.

The statement also took issue with HFO refrigerants, noting that one of the atmospheric degradation products of some HFOs is trifluoroacetic acid (TFA), “which is difficult to degrade and harmful to health.” The companies added that they welcome the regulation of HFOs under the EU’s REACH (Registration, Evaluation, Authorisation and Restriction of Chemicals) regulation.

Another similar statement was recently announced by four European organizations, asking the EC, the European Parliament and national governments to maintain an ambitious stand in their ultimate revision of the EU F-gas Regulation, particularly in regard to heat pumps.

Statement on the planned revision of the EU F-Gases Regulation

F-gases are among the fastest growing greenhouse gases, mainly due to the increasing demand for refrigeration and air conditioning, especially in developing countries. F-gas emissions currently account for 2.5% of total EU greenhouse gas emissions and 5% of emissions covered by binding national emission targets, according to the EU Commission.

In the proposal for the revision of the EU F-Gases Regulation, an HFC quota system would severely limit the future supply of HFCs to the EU market, reaching 2.4% of 2015 levels in terms of their potential global warming impact in 2050, the EU Commission adds. The system would give all relevant sectors a strong economic incentive to use climate-friendly alternatives. In addition, F-gases would be completely eliminated in some sectors, which is not a problem, especially in new plants with the alternative processes available today. The proposal also updates a number of obligations for companies, such as checking for refrigerant leaks, keeping appropriate records, training of service personnel and proper treatment of refrigerant recovered from refrigeration, air conditioning and heat pump equipment. In particular, training of service personnel should be promoted through appropriate (financial) incentives. Improved leakage monitoring combined with strict sanctions would allow existing systems to continue to operate with climate-relevant F-gases for a longer period of time despite the shortage of skilled workers.

The EU Commission’s proposal strengthens the permitting system and labelling requirements to improve enforcement of trade restrictions. In addition, the new regulation would strengthen existing monitoring and verification systems to ensure compliance with the Montreal Protocol and set standards for Member State sanctions to deter illegal trade in F-gases.

In our view, F-gases include the so-called HFO (HFCs with a double bond between two carbon atoms) currently favoured by the chemical industry and some refrigeration, air conditioning or heat pump equipment manufacturers. HFOs have a low global warming potential because they decompose in the atmosphere within a few days. One of the atmospheric degradation products is trifluoroacetic acid (TFA), which is difficult to degrade and harmful to health, and is produced in much larger quantities than conventional HFCs. With the exception of 1233zd(E) and 1336mzz, HFOs are flammable and can decompose into very toxic substances. They can be replaced by natural refrigerants in all applications. These usually achieve better energy efficiencies than HFO.

We therefore expressly welcome the planned revision of the EU F-Gas Regulation and a regulation of HFO, e.g. within the framework of the EU REACH Regulation. The refrigeration, air-conditioning and heat pump industry has destroyed the ozone layer with CFCs, heated up the global climate with HFCs and is now contaminating the soil and drinking water with TFAs with HFOs. This aberration must be stopped by appropriate far-sighted regulations with consideration of the obligation to the precautionary principle.

Thomas Bartmann, Member of the Executive Board, Efficient Energy 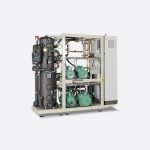