Arneg – an Italian designer, manufacturer and installer of CO2-based equipment for the retail sector – recently became a gold partner on R744.com.

The company expects demand for CO2 systems to grow as the HFC phase-down ramps up. “The demand for CO2 systems is growing in all markets of the world,” Gian Paolo Di Marco, Export Sales Director, Arneg, told R744.com. “In particular, the most advanced markets are driven by the imminent phase-out of HFC refrigerants; those emerging, instead, are driven by the will to give a ‘green’ image to their company.”

Arneg expects this growth to continue. “We expect strong growth in demand from all countries, but especially in the short-medium term from Latin America and Australia,” Di Marco said.

The company has already done many installations throughout the world. One of its most innovative is in an Iper supermarket in Arese, a commune of Milan in northern Italy, using its transcritical CO2 rack with an ejector. The 9,000 sq.m supermarket is located in ‘Il Centro’ mall, the largest shopping mall in Italy and one of the biggest in Europe.

“Surely the use of the ejector will get a foothold, especially for applications on medium to large power plants.“

“The Iper supermarket in Arese is one of the first stores in Italy to have adopted cutting-edge solutions that eliminate use of HFCs, using the ejector technology for CO2 transcritical systems and reducing electricity consumption at the same time,” said Alberto Paccagnella, Refrigeration Engineering Manager, Arneg.

Arneg sees the ejector as a technology that can be used for large and small capacities. “Surely the use of the ejector will get a foothold, especially for applications on medium to large power plants. It still has to be evaluated whether it can be used on small power plants,” Paccagnella said.

The company released its CO2 condensing unit at this year’s EuroShop. “There is a growing interest from the market for CO2 condensing units,” he said. “In the European market, the world of natural refrigerants for commercial applications will make further progress in the coming years, largely suppressing plants using synthetic refrigerants.” 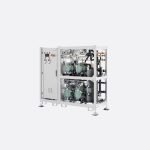