Energy Recovery, a California-based manufacturer of pressure exchangers, has found that its PX G1300 device can increase the energy efficiency of CO2 (R744)-based commercial refrigeration systems by up to 25% at an ambient temperature of around 37°C (98.6°F), compared to a standard CO2 booster system.

In so doing, the pressure exchanger can also help lower capital expenditure and operational costs by reducing the load on a system’s compressor, according to Joseph Marchetti, Energy Recovery’s Product Manager for CO2 Refrigeration.

Data was gathered from an installation at a European supermarket, and the results were presented by Marchetti during a refrigeration session at the ATMOsphere (ATMO) Europe Summit on natural refrigerants. The conference took place November 15–16 in Brussels and was organized by ATMOsphere, publisher of R744.com.

Founded in 1992, Energy Recovery’s pressure exchangers have been used in water desalination plants. However, the company has recently expanded its scope to include CO2 refrigeration systems. To date, Energy Recovery has sold around 30,000 of its PX units.

Energy Recovery was approached by a rack manufacturer “with a unique way” to implement the PX G1300 into its system, explained Marchetti.

Since its installation at the European store, the pressure exchange system has shown “clear improvement” over a booster system at most temperatures.

At milder ambient temperatures, the pressure exchange system has seen a 10% improvement in efficiency, while at 30–35°C (86–96°F) ambient, system COP was improved by around 20%, he explained.

“This pressure exchanger gives us the opportunity to potentially reduce components from the system, with high-pressure valves and compressors being the two functions that we begin to replace,” he said. “When designing a new rack, you can start to remove some of that cost by removing such components.”

The stability of the system can also be improved with the introduction of a pressure exchanger, particularly at high temperatures.

“By implementing [the pressure exchanger] into CO2 refrigeration systems, we are seeing energy savings,” he said. “However, we need to continue operating the system to even higher temperatures to really understand its full value proposition.”

More information about the developed system will be published early next year, said Marchetti.

Energy Recovery – which recently showcased its PX G1300 pressure exchanger at the FMI (Food Industry Association) Energy and Store Development Conference in Orlando, Florida, in September – is also currently finalizing the commissioning of a second system at a supermarket in California. In this instance, the company is retrofitting an existing system to integrate its PX G1300, which can help boost system capacity, particularly during periods of extreme heat, explained Marchetti.

The manufacturer has “additional committed deployments” for commercial and industrial applications in the U.S. and Europe, which are due to take place over the coming months. While Energy Recovery is working with companies that have presence in the Asia-Pacific region, they do not currently have any committed installations there at present.

According to Marchetti, the PX G1300 requires “virtually no maintenance” and can run for 20–25 years “without having to touch them.”

The company is targeting a two- or three-year payback period for its PX G1300 device. 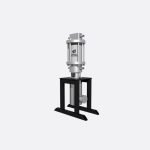