The COP of a transcritical CO2 (R744) heating and cooling system at a horticultural site in Maasbree, the Netherlands, has been improved by nearly 18% with the integration of a high-efficiency propane (R290) heat pump, according to a case study produced by the system’s suppliers and contractors.

The horticultural site also plans to add an isobutane (R600a) unit to the system to increase output temperatures to 80°C (176°F), which will enable thermal storage.

The case study was presented by Alessandro Farina, Application Manager at component manufacturer Castel; André Dunnebier, Technical Manager at component supplier Euro-Cold; and Wil van den Kerkhof, Technical Director at contractor Servex, during an HVAC and heat pumps session at the ATMOsphere (ATMO) Europe Summit on natural refrigerants. The conference took place November 15–16 in Brussels and was organized by ATMOsphere, publisher of R744.com.

According to Dunnebier, the horticultural operator wanted a heating and cooling system that was free from fossil fuels and used only natural refrigerants. It also needed a system that could supply a range of temperatures, while still being energy- and cost-efficient, reliable and operational in any climate.

To meet these demands, a transcritical CO2 system with two gas coolers was chosen and integrated with an R290 heat pump, including a condenser that is connected to a subcooler to boost capacity and satisfy the customer’s requests.

This is the second installation completed by Servex that has used R290 to subcool CO2 in transcritical mode, said van den Kerkhof.

He also explained that the system includes a special gas cooler that can work as an evaporator when the outside air is needed as the heat source for the CO2 system.

According to van der Kerkhof, “technical improvement of system design and components is the key to making R744 and R290 the perfect solution for [an integrated] heat pump and cooling system.”

He added that subcooling with an R290 unit can be added to any existing CO2 system.

Subcooling with an R290 unit “can make a bad CO2 system a good one.”

To boost the cost efficiency of the system, the end user plans to install an R600a unit that will be used to produce excess heat when energy costs are low. The high-temperature water produced by this secondary unit will then be stored in two 3,000m3 (105,944ft3) units to be used around the site when energy costs are higher.

According to van der Kerkhof, this heat will mainly be used to heat the site’s large greenhouses, while lower temperature heat will be used for underfloor heating around the factory. 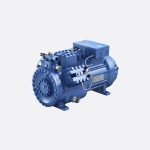 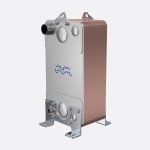