Australia Gets its First Ammonia/CO2NewTon Systems

These are the first NewTon systems to be installed in Australia.

The end user is a large multinational membership-based retailer that has been using third-party warehousing for refrigerated and non-refrigerated goods distributed to its retail outlets, explained Mack Hajjar, Projects Engineer for Tri Tech Refrigeration Australia. “Given the number of existing retail outlets that they have, with plans for more, the end user decided to build their own distribution center.”

The decision to use the NewTons, Hajjar said, was motivated by the customer’s requirements for safety and system redundancy.

One of the advantages of the NewTon system is that it employs CO2 as a secondary refrigerant, reducing the overall ammonia charge and keeping it confined to the plant room. “The severity of an ammonia leak is further reduced because the total charge is distributed amongst several NewTon packages that in turn use semi-hermetic compressors which eliminates the risk of any shaft seal leaks,” said Hajjar.

“These compressors are advanced; they have no shaft seal, no slide valve, are fully speed controlled, and use permanent magnet motors. It is good to see new technology like this come into the Australian market,” he added.

There is a high level of redundancy built into the design as per the customer’s requirements, explained Basil McKinley, the principal refrigeration consultant for the project. “One of the R6000 units provides 100% redundancy for the low- temperature system, as well as providing back-up for the medium-temperature system via a heat exchanger if required,” he said.

“This also slows the CO2 pressure rise in the medium-temperature system in the event of power failure by using the thermal mass of the freezer store,” McKinley added. “The standby diesel generator only needs sufficient capacity to drive a low-temperature CO2 pump and the fans of one freezer store evaporator to keep both CO2 systems below design pressure during an extended power outage.”

Compared to a traditional ammonia-pumped circulation system, the two NewTon R6000 units for the frozen storage area reduce the amount of ammonia from an estimated 1,900kg (4,189lbs) to 100kg (220lbs), according to Peter O’Neill, General Sales Manager for Mayekawa Australia, who spoke about the project during ATMOsphere Australia, held this past May in Melbourne. The CO2 charge in this case is 1,300kg (2,866lbs).

First proposed over two years ago, the project entered its final installation stages in June and was commissioned in late July. Commissioning support was provided by Mayekawa Japan.

Regarding estimates on future energy performance, Hajjar said that “based on energy usage data obtained so far, overall typical compressor consumption is considerably lower than a conventional two-stage pumped ammonia plant servicing an industrial cold store of a similar size.”

There were several challenges during installation and commissioning, Hajjar acknowledged, including providing elevation between the NewTon packages and CO2 pump stations; in this project that was done with structural steelwork. ”Balancing water flows to optimize heat rejection/efficiency and maintaining adequate defrost temperatures were managed through commissioning and programming,” Hajjar said.

Hajjar expects that, with regular preventative maintenance and ongoing manu- facturer-recommended service, “the plant is expected to perform as designed for over 25 years, which is typical for industrial refrigeration plants.”

Mayekawa expects to sell 330 sets of its NewTon ammonia/CO2 cooling systems this fiscal year (April 2019 through March 2020), the company said in an interview conducted at its Moriya production facility in August. (The number of sets is equal to the number of compressors used; some NewTon units contain more than one compressor.) This would bring the total number of sets sold past 2,000 (95% in Japan) since the system was introduced in 2008. 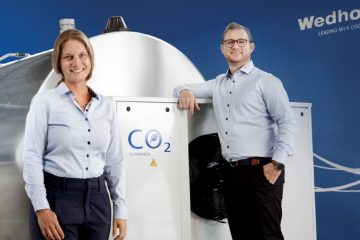 Using Recycled CO2, Swedish Milk-Cooling System Saves Up to 50% in Energy Use