As the Beijing 2022 Olympics got underway on February 4, the world was made aware of the first-time Olympics adoption of environmentally friendly CO2 (R744) refrigeration system at four of the ice-rink venues at the games.

“The Olympic Games are first and foremost a sporting event, but with their global visibility, they also provide an important platform to showcase sustainable solutions,” said Marie Sallois, IOC Director for Sustainability, in a statement.

According to the IOC, the use of natural CO2 refrigerants at the Winter Olympic Games will help reduce carbon emissions by an equivalent of 3,900 cars per year, cutting them to nearly zero; a similar carbon reduction could be achieved by planting about 1.2 million trees.

The CO2 technology also has a cooling efficiency that is 1.2 times higher than that of HFC refrigerants, and can maintain a temperature consistency of 0.5°C (0.9°F) or less across ice surfaces, making the ice easier to skate on, added the IOC.

Meanwhile, an article by the U.S. news agency Associated Press (AP), published on February 4 by the Washington Post and many other outlets, pointed out that the Beijing Olympics will be “putting a major environmental problem on the world stage — the potent greenhouse gases often lurking in refrigerators, air conditioners and other cooling systems.”

The CO2 being used in ice skating, figure skating and other competitions at the Olympics has “far less of an impact on global warming than the artificial refrigerants,” the AP article noted. It added that organizers of the Games say the CO2 cooling “could bring attention to the use of artificial refrigerants globally, which is expected to become a growing problem as developing countries get richer and use more and more cooling appliances.”

The Olympics is also employing another natural refrigerant – ammonia/NH3 (R717) at the National Sliding Center, an indoor/outdoor facility that is hosting the bobsleigh, skeleton and luge events.

On the other hand, the organizers chose R448A, an HFO/HFC blend with a 100-year GWP of 1,400 (and a 20-year GWP of 3,100) to be the refrigerant for making ice at three rink facilities: the National Indoor Stadium, the Wukesong Sports Center and the National Aquatics Center (the “Ice Cube”).

On the whole, the Beijing Olympics has committed to staging “carbon-neutral Games,” said the IOC, and the debut of the new refrigeration technology is among the ways in which it is reducing the Games’ carbon footprint.

For example, the Beijing Olympics is powering all its venues with renewable energy – another “first” at the Olympic Games – and using fuel-efficient  and clean-energy vehicles for all passenger cars, and 85% of all vehicles.

Last November, the IOC joined the UN-backed “Race to Zero” campaign, which is aimed at rallying climate leadership from non-government entities to work towards a carbon-free world.

The NSSO is the only newly built venue in Beijing’s Olympic Park, with a surface of 12,000m2 (129,167ft2). It can meet the competition requirements of five ice sports: speed skating, short track skating, figure skating, curling and ice hockey. Cutting-edge technologies enable the entire venue to be used for different purposes simultaneously.

The system was designed by Swedish OEM Green & Cool, and manufactured by Profroid in France; both companies are wholly owned subsidiaries of U.S.-based Carrier. Italian manufacturer Dorin supplied its CD600 and CD400 CO2 compressors for the project.

The CO2 system delivers liquid CO2 under the ice, producing “hard ice for speed skating and smooth ice for dancing,” said Carrier. The heat reclaimed by the system us utilized for dehumidification, ice surface maintenance, ice melting, floor heating and tap-water and complete-building heating at the NSSO, which is capable of saving up to 2 million kWh of electricity each year compared to the traditional HFC systems.

The NSSO has a “very special multi-purpose concept” with 10 floor zones that can be frozen individually, or as a whole, becoming a huge ice surface of about 12,000m2,” said Guy Evon Cloutier, CEO of the CTC Group, an ice-rink consultancy based in China that is part of a consortium with CIMCO Refrigeration, which provided consulting services for the NSSO project. The 10 refrigerated floor zones include two track zones and two arenas with dedicated pumping systems; the other six zones are connected to two pumping systems but with individual zone valves and temperature control.

The Capital Indoor Stadium is using a transcritical CO2 system from Beijer Ref China, based in Wuxi, China. The system consists of two transcritical CO2 racks that provide 1.1MW (312.8TR) of cooling capacity with a coefficient of performance (COP) of 2.8. It also includes three-stage heat reclaim, which drives the cooling and heating COP to 6.6. German compressor manufacturer BOCK reported that it supplied CO2 compressors for the Capital Indoor Stadium and other venues at the Beijing Olympics.

“The Olympic Games are first and foremost a sporting event, but with their global visibility, they also provide an important platform to showcase sustainable solutions.” 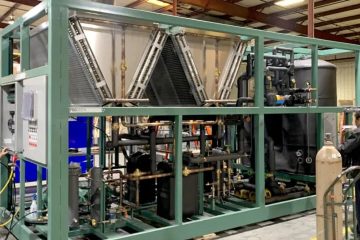 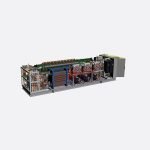 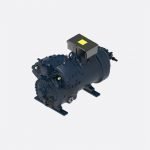