Sales of an industrial-size coalescent oil separator from U.S. component manufacturer Temprite are benefitting from the emergence of transcritical CO2 as a force in industrial refrigerator, said Temprite President Jim Nonnie.

“For decades it’s been ammonia uncontested,” Nonnie said, in an interview at Temprite’s booth at the IIAR 2022 Conference in Savannah, Georgia (U.S.), held March 6-9. “Now all of a sudden, here comes transcritical CO2 taking a piece of ammonia refrigeration’s turf.”

The industrial coalescent oil separator, model 239A, which Temprite has been marketing in earnest over the past year and a half, accommodates twice the refrigeration capacity as Temprite’s next largest unit, model 139A. Both are part of the company’s 130 Series of coalescent oil separators, designed specifically for transcritical CO2 systems. Temprite, based in West Chicago, Illinois (U.S.), is planning to release an even larger unit over the next year, said Nonnie.

The oil separators are CE-marked (complying with PED 2014/68/EU) and are UL-listed. ASME stamped units are available while CRN applications are in process. They are rated up to 140bar (2,030psig).

Replacing conventional oil separators with coalescent units can save retailers both energy and money, according to a report by U.S. component manufacturer Emerson Climate Technologies, and shared by Temprite.

In addition to coalescent and conventional oil separators, Temprite specializes in oil reservoirs, drier housings, liquid receivers, suction accumulators and refrigerant oil management products. All products accommodate CO2 and hydrocarbons, and ammonia/NH3 (R717)-compatible versions of many of its products can be made, if not already available.

Temprite products “are engineered and manufactured to enable improved refrigeration system thermal efficiency by minimizing oil and dirt in the system’s evaporator,” the company says on its website. “This results in shorter compressor run times, reducing carbon emissions and energy consumption and providing the highest possible return on investment.”

“Now all of a sudden, here comes transcritical CO2 taking a piece of ammonia refrigeration’s turf.” 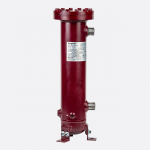