Cool Up, a German-financed program to upgrade cooling systems in Egypt, Jordan, Lebanon and Turkey (MENA), has issued a warning that the significant increase in demand for refrigerants in these countries will result in an increase in f-gas emissions unless a rapid transition to natural refrigerants takes place.

“It is crucial to implement low-GWP practices before or in the early stages of market growth,” said Barbara Gschrey, Managing Director at Öko-Recherche, Cool Up’s research partner. By transitioning to natural refrigerants sooner rather than later, countries could prevent locking in polluting technologies for decades to come as demand increases.

Gschrey and other Cool Up representatives shared insights from the first two years of the six-year program during the “MENA [Middle East and North Africa] Region in Focus” session at the ATMO World Summit 2022, held online March 30–31. ATMO World Summit was organized by ATMOsphere (formerly shecco), publisher of R744.com.

“It is crucial to implement low-GWP practices before or in the early stages of market growth.”

The presentation follows a COP12/MOP33 side event last October on the Cool Up program, which is financed by the International Climate Initiative through the German Ministry for the Environment.

According to Öko-Recherche’s data, the refrigeration and air-conditioning market in MENA is worth around €8 million (US$8.65 million). This is expected to grow by 5% annually until 2024 due to economic growth, population growth and improved living standards in the region.

The German Ministry of the Environment has called natural refrigerants and ambitious energy efficiency standards “the choice of the future” for the four Cool Up countries. Already an NH3/CO2 (ammonia (R717)/R744) cold room cascade system has been installed at an ice cream manufacturing plant in Turkey, according to the ATMO World Summit presenters.

But according to data shared during the presentation, existing residential and commercial systems across MENA are still heavily reliant on HCFCs, particularly R22, and HFCs like R410A, R407C and R134a.

When asked what the main obstacles and drivers were for the uptake of natural refrigerants in MENA, Öko-Recherche’s Gschrey attributed the slow transition to a lack of awareness and capacity among technicians, particularly around the handling of flammable refrigerants and CO2 systems.

“There’s a lot of skepticism around flammability, so the international situation in terms of standards should act as a bit of a driver,” she said. “We are expecting the standard revisions for major applications soon and increases [in] charge sizes, so the possibilities will grow in this respect.”

“It’s maybe comparable to the situation in Europe 10–15 years ago,” she continued. “There was a lot of concern that has been overcome since then, and I would say the situation is similar in [MENA] countries.”

She noted that the parallel regimes of the Montreal Protocol and its Kigali Amendment give “the opportunity for leapfrogging to switch from HCFCs to non-HFC alternatives.”

The Cool Up program is focusing on three measures to achieve the necessary reduction in HFC emissions: reducing the leakage rate of existing systems, promoting the development of low-GWP solutions for both new equipment and retrofitting, and adopting better recovery, recycling and reclamation programs to reduce end-of-life emissions and the demand for virgin HFCs.

A key to success, according to Katja Dinges, Associate Director at Guidehouse (Cool Up’s project management partner) is “to bring all the different stakeholders together … to encourage the use of natural refrigerants and reduce cooling demand [as well as to] streamline all the different activities.”

“All the market and policy and finance perspectives need to be brought together,” added Dinges.

As a parting note, Gschrey speculated that the example of the EU market “will be a good driver and set a good example for companies and players in the [MENA] market to move in this direction.”

During the event, Cool Up also issued a request for further examples of sustainable air-conditioning or refrigeration systems from across MENA – the only condition being that they must run on natural refrigerants only. 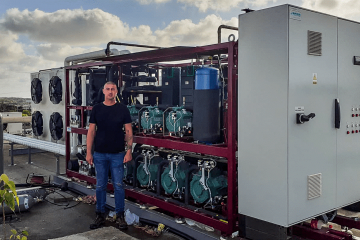