Belgian retailer Delhaize, part of the Ahold Delhaize group, last summer opened a new 2,500m2 (26,910ft2) store in a mall in the Anderlecht section of Brussels that is 40-45% more energy efficient than a previous store in a different location in the same mall.

The store includes transcritical CO2 (R744) refrigeration and a host of energy-saving measures, giving the store a COP of 3.5 to 4 depending on the season, according to Marc Verleyen, Manager for Technics and Equipment at Delhaize.

The SteelX CO2 refrigeration rack, from Danish OEM Advansor, works with an adiabatic gas cooler, and features EC fans and Bitzer compressors (including parallel compression) with inverters and permanent magnet motors. The rack has a capacity of 220kW (62.6TR) medium temperature and 33kW (9.4TR) low temperature.

The old store had an R404 system with “lots of leaks and high maintenance,” according to David Schalenbourg, Director of Architecture, Construction and Maintenance with Delhaize.

The refrigeration system is equipped with heat recovery, which supplies heating for the storage area in the back and for a hot-water battery in the store’s air-handling unit. Hot water for the butchers is produced by a separate R290 heat pump.

The system is managed by Danfoss controllers, with electronics from Schneider Electrics. It has been “running smoothly” since its launch in June, said Benoît Rielaert, Delhaize’s technical coordinator on the project.

All cabinets are from Spanish OEM Koxka and include LED lighting and EC fans. The remote CO2 vertical cabinets have doors, while eight plug-and-play semi-vertical cabinets for food-to-go, fresh fruit, vegetables and meat are open and use propane (R290). Delhaize had previously experimented with closed semi-verticals, as the open version use about twice the amount of energy as closed ones do, but closed doors were found to have a negative impact on sales.

The store does not have redundancy built into the refrigeration system, having only one rack installed, but it does have two cold rooms to store merchandise in case of emergencies. These two rooms — one medium temperature and one low temperature — will be cooled by smaller CO2 units from Profroid (a division of Carrier) with 5-7kW (1.4-2TR) capacity.

The Delhaize store is located in a new and well-insulated part of the Westlands Mall, saving the company additional energy and eliminated the need for fossil fuels in heating.

Heating is now taken care of by an R32 heat pump. Addressing why Delhaize chose R32 instead of a natural refrigerant for the Anderlecht store, Verleyen said that it was a combination of economic issues and the simplicity of installation with fewer pipes running through the store.

However, Delhaize is planning to make the switch soon enough, with Verleyen saying that he hoped the competitiveness of R744 HVAC units will increase in the coming years.

Perhaps Delhaize and other retailers won’t have to wait too long. Swiss OEM Biaggini Frigoriferi installed a reversible CO2 AC-heating system in a Swiss shopping mall earlier this year, a first of its kind, according to Biaggini, replacing both an oil boiler and an old HFC cooling system in the process.

Delhaize Belgium has around 900 stores, of which 140 are operated by the company itself, and the rest by affiliates who invest their own money in the stores (as opposed to franchisees). In the stores operated by Delhaize, 75% are now converted to CO2 refrigeration. The converted stores have, on average, experienced a 15% drop in energy consumption, according to Schalenbourg.

Getting the affiliate stores converted to CO2 is a bit slower going, Schalenbourg explained, but the medium-sized stores, up to around 1,500m2 (16,145.9ft2), are now at 30-40% with CO2, and 10-20 more stores are being converted each year. For the smallest store segment, there is still less penetration of CO2 refrigeration, Schalenbourg said, and they use mostly R290 plug-and-play cabinets. 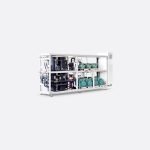