In February, Spanish train manufacturer Talgo signed an agreement with Deutsche Bahn, the national railway operator of Germany (and the largest in Europe) to supply up to 100 Talgo ‘ECx’ long-distance trains to its fleet from 2023 onwards.

The first order is for 23 trains, which reach a maximum commercial speed of 230 kilometres per hour.

All trains will be built according to European regulations and will have the usual German configuration: a locomotive developed by Talgo, and a group of 17 cars at the end of which is a trailer with a cabin that allows the train to operate in both directions, offering a total of 570 seats.

Innovation also plays a key role: trains will also have stands that will reduce the energy consumption of the train composition traction system. The air-conditioning systems will work with natural refrigerant CO2.

Other aspects are the priority use of the braking effect of the electric recovery brake (feedback of regenerative energy through the locomotive to the catenary), or the elimination of steps to grant passengers more comfortable access at platform level.

In 2016, Deutsche Bahn – with support from the German Environment Ministry (BMUB) – started testing air-conditioning systems operating without fluorinated refrigerants for use across their fleet from 2020 onwards.

Talgo opened a subsidiary in Berlin 25 years ago. The contract with Deutsche Bahn is its most ambitious project in Germany to date. The German operator plans to use these trains on long-distance routes, both national and international. 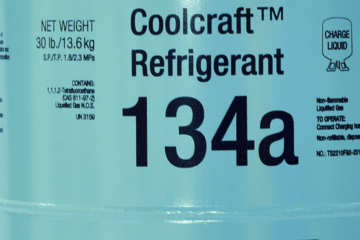 This website uses cookies to improve your experience while you navigate through the website. Out of these, the cookies that are categorized as necessary are stored on your browser as they are essential for the working of basic functionalities of the website. We also use third-party cookies that help us analyze and understand how you use this website. These cookies will be stored in your browser only with your consent. You also have the option to opt-out of these cookies. But opting out of some of these cookies may affect your browsing experience.
Necessary Always Enabled

Any cookies that may not be particularly necessary for the website to function and is used specifically to collect user personal data via analytics, ads, other embedded contents are termed as non-necessary cookies. It is mandatory to procure user consent prior to running these cookies on your website.

Shopping Cart 0
No products in the cart.
New R744.com Feature !

and save 10% on your next ATMOsphere events ticket