German food retailer EDEKA Beckesepp, an independent operator under the EDEKA Group, has installed a transcritical CO2 (R744) refrigeration system in a wooden-frame store with a bakery and café, overcoming “extreme demands” on the acoustic insulation.

SüdKälte dealt effectively with the acoustic challenges, such that the store has “no sound problems,” said TEKO. Because the machine room is located on the second floor of the building, SüdKälte also had to comply with weight specifications.

The ROXSTAsmart system offers a medium-temperature (-10°C/14°F) capacity of 20kW (5.7TR) and a low-temperature (-31°C/-23.8°F) capacity of 10kW (2.8TR). It comes with two COOL2Heat heat recovery units, one for domestic hot water and one for building heating. “No waste heat is transferred to the outside in winter,” said TEKO.

Other components include a gas cooler, gas cooler bypass, desuperheater and WURM controls.

EDEKA has specified natural refrigerants, especially CO2, since at least 2015. For this operator, SüdKälte “had an impact” on the selection of the TEKO system, the OEM said, adding that EDEKA Beckesepp has already implemented a TEKO CO2 system at a third store and more are planned.

“No waste heat is transferred to the outside in winter.” 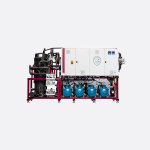