Ejectors: to efficiency and beyond!

Ejectors can dramatically extend the scope to use CO2 as a natural refrigerant across the spectrum – from smaller convenience stores to large hypermarkets – by helping to overcome the so-called ‘CO2 equator’. The CO2 equator refers to the previously accepted geographical limit for cost-effective and efficient performance of CO2 systems in all food retail store formats.

Delving into the science

In Europe, ejector manufacturers have tended to focus on commercial refrigeration.  Two common ejector types – the fixed and the modulating ejector – both have strengths and weaknesses.

“I think that the best one is the ‘fixed nozzle’ ejector in combination with parallel [compression]” configured in such a way to maximise system efficiency, said Sergio Girotto, president of Italian refrigeration firm Enex.Carrier and CAREL have joined forces to develop and industrialise an electronic modulating ejector, potentially putting an end to the concept of the CO2 equator. Launched at the ATMOsphere Europe conference in April 2016, “the electronic modulating ejector is capable of increasing system efficiency by up to 25% – with annual averages of 10% in the typical climates of southern Europe,” according to CAREL’s Alessandro Greggio.

“[This] eliminates the need for redundant, cascade refrigeration systems, providing improvements in energy efficiency of 10% or more”.

Danfoss is looking at stacking ejectors on top of each other to improve the efficiency gains even further. Ekaterini Kriezi, a Danfoss technology expert, explains how the concept works. “The multi-ejector is capable of recovering energy while controlling the high pressure of the transcritical application. [This] eliminates the need for redundant, cascade refrigeration systems, providing improvements in energy efficiency of 10% or more,” she said.

Danfoss point out that the multi-ejector solution has been engineered specifically to overcome warmer climate conditions. “We have reduced energy penalties associated with operating transcritical CO2 systems in high ambient temperatures, making transcritical CO2 systems more efficient than HFC systems in any climate zone,” said Kriezi.Over 100 manufacturers, retailers, contractors and consultants gathered in the Italian city of Padova on 29 September 2016 to address the issue of how developments in ejector technology can improve the performance of CO2 refrigeration systems in warm climates

Enex’s Girotto, who helped to organise the Padova event, demonstrated how using ejectors improves upon system design. “This is critical in a southern European climate, because several component breakdowns were recorded using the conventional system in warm climates,” he said.

“With ejectors, units in Italy are working, during the warmest summer days at air temperature higher than 40°C for a significant number of hours”.

“With ejectors, units in Italy are working, during the warmest summer days at air temperature higher than 40°C for a significant number of hours. It means that even if they have not yet been installed in the extreme south of Europe, like Greece, they will work there,” Girotto explained.

Ejectors can improve system efficiency wherever they are deployed. “In the warm climates of Southern Europe, Carrier’s high-efficiency vapour ejector system has achieved total store energy savings of more than 13% versus our standard transcritical CO2OLtec system. Similar energy savings may be achieved in northern climates, although this depends on a number of factors,” said James Nutting, director of marketing, key accounts and sales development at Carrier Commercial Refrigeration Europe.

“In addition, the ejector can be combined with other high efficiency components including the economiser cycle and liquid pump to further maximise energy savings across all climates,” Nutting said.

Danfoss has installed over 50 ejectors in Europe. Once it has refined the technology in Europe, the company plans to roll it out elsewhere.

Enex has sold about the same number of ejectors as Danfoss in Europe, including in Italy, Poland, Romania, Switzerland and Germany. Most European countries, with the exception of Scandinavian nations and northern Germany, would benefit from ejectors and parallel compression, according to Girotto. “Those countries all have at least two to three days of warm temperatures from an operational point-of-view,” he said.

Girotto said Enex would consider partnering with a US company to bring its technology to the United States.

Other companies sense an opportunity to develop their own ejector. Compact Kältetechnik’s Stephan Leideck said the company’s ejector for transcritical CO2 systems would hit the market by early 2017.

This is an excerpt from the winter edition of Accelerate Europe magazine. Click here to read the full story.

Kroger Faces Pressure from Stakeholders and Consumers to Act on HFCs 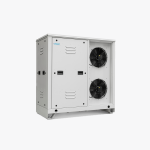