In response to growing commercial and industrial interest in transcritical CO2 (R744) systems in North America, U.S.-based Emerson is stepping up its global development of this technology with two new control products, an expanded CO2 compressor portfolio, four new research centers, as well as a robust communication and education strategy.

Overall, Emerson is focused on simplifying the application of CO2 systems.

“We feel that more and more retailers [in North America] in the next three to four years will go from trial to full adoption of CO2 systems, which will drive 480 to 800 new systems,” said Andre Patenaude, Emerson’s Director, Solutions Strategy, Cold Chain, in an interview with R744.com.

Emerson’s refrigeration products, marketed through its Sidney, Ohio-based subsidiary Emerson Commercial & Residential Solutions, include a wide range of commercial and industrial components for CO2 and propane (R290) as well as ammonia/NH3 (R717) under its Vilter brand.

Emerson’s primary new control product is the Lumity E3 Supervisory Control designed for CO2. It is intended to “make working with CO2 easier,” thereby facilitating more adoption, said  Patenaude. Emerson has also announced the new Lumity CC200 case controller, with an option for CO2. Both products are being field tested and will be available globally later this year.

E2 and standard E3 controllers can be programmed by OEMs or contractors to make them accommodate CO2 functionality. But the company has now decided that “CO2 needs its own programming” within the E3 platform, with native algorithms built in, making CO2 systems easier to use and troubleshoot, said Patenaude. At the same time, companies that wish to tailor the E3-CO2 controller to a particular preference will still be able to do so.

Hot-gas defrost will be added to the E3-CO2 platform, though U.S. retailers have heretofore favored electric defrost for natural refrigerants, Patenaude said. “We’re seeing more and more of a trend with Canadian retailers and especially in industrial CO2 for hot-gas defrost, and if that bleeds over to commercial, we need to have a native application to make CO2 easy,” he explained.

Meanwhile, the new CC200 case controller will include demand defrost, handling up to three evaporator coils with three stepper or pulse width modulated valves and a suction Evaporator Pressure Regulating (EPR) valve, all in one case.

Emerson also announced an expanded capacity of its  current Copeland 4MTLS transcritical CO2 semi-hermetic compressor lineup. The new compressor, to be globally available in the coming months, features “our largest displacement in the 4MTLS product line” at 330,000BTU at 20°F (-6.7°C), said Patenaude.

Emerson has also launched new Copeland variable frequency drives (the EVM/EVH series) for any motor-based component. All lead compressors and parallel compressors in CO2 systems use a variable-speed drive.

Along with the new products, Emerson is engaged in building four new labs for CO2 technology development that will open in July at its Sidney, Ohio campus.

Last year, Emerson completed the second phase of a four-year-old, US$110 million renovation project at its main campus in Sidney, including 110,000ft2 (10,220m2) of development labs. Within those labs, the company is building a supermarket lab with 18 display cases from five case manufacturers, as well as walk-in freezers and coolers; it will test CO2 technologies like gas coolers (adiabatic, dry and water), ejectors, parallel compressors, mechanical subcoolers and more. “It will be our sandbox for learning and testing our products,” said Patenaude.

Another new lab will examine transcritical CO2 scroll compressors for supermarkets that Emerson has launched in Europe but won’t be released in the U.S. for another 1 to 1.5 years.

Two additional labs will focus on CO2 condensing units, which are just beginning to be produced in North America. “We want to learn how to support the OEMs that will be building them,” said Patenaude. Emerson also has a six-year-old development facility, called The Helix Innovation Center, in Dayton, Ohio.

On the educational side, Emerson has bought a CO2 booster system that can be shipped around North America for training. Emerson has also produced 20 videos on the basics of CO2 refrigeration as well as a series of CO2 blogs.

“We’re serious about CO2 and supporting the industry, and we’re investing in it,” said Patenaude.

“We feel that more and more retailers [in North America] in the next three to four years will go from trial to full adoption of CO2 systems, which will drive 480 to 800 new systems, 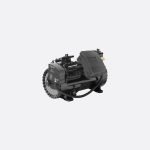