Japanese OEM Mayekawa expects to sell 330 sets of its flagship NewTon NH3/CO2 cooling systems this fiscal year (April 2019 through March 2020), bringing the total number of sets sold past 2,000 since the system was introduced in 2008.  (The number of sets is equal to the number of compressors used; some NewTon units contain more than one compressor.)

In a recent interview conducted at the company’s main manufacturing facility in Moriya, Japan, Shinichi Yageta, plant vice manager & general manager of Mayekawa’s NewTon production department, explained that the company is seeing an increasing opportunity for the NewTon in Japan’s industrial refrigeration sector as well as in overseas Asian markets.

Natural refrigerant subsidies (provided by Japan’s Ministry of the Environment) have provided “a big boost” to sales of the NewTon system, according to Mayekawa.

In 2016 in particular, as the subsidy scheme was ending its first three-year period, the company saw a rush in demand for the NewTon system. Subsidized installations however, still represent “about one-third of total sales,” said Hideyo Asano, who serves as a special advisor to Mayekawa’s NewTon production department.

In addition, Asano explained that the company has noticed an increase in the number of business owners who have become aware of strict f-gas regulations.

This awareness has contributed to business owners choosing to install the NewTon systems, according to Asano.

Over the next few years, Mayekawa sees the Japanese food-processing sector as offering the biggest opportunity for NewTon sales as several facilities are aging and expected to undergo renovations.

Though overseas sales currently account for only 5% of total NewTon sales, the company expects this to grow in the near future — especially in Korea, Taiwan, and Southeast Asia. The reason is that in these markets Mayekawa uses “basically the same business model for selling the NewTon as we do in Japan,” said Asano.

“We do business with the end user directly [in these markets]. That is very important to install the NewTon.”

https://www.youtube.com/embed/GgJ0IuojpO8Mayekawa gave shecco a tour at its main NewTon factory in Moriya, Japan, in July.

Innovation of the year

Mayekawa’s NH3/CO2 NewTon system won the Innovation of the Year award at this year’s ATMOsphere Japan 2019 conference, held in Tokyo in February.

“We were so surprised and honored to receive this award. Thank you so much,” said a Mayekawa representative who received the award.

“The point is how can we stop global warming. That is our mission, we believe. The refrigerant issue is, of course, important, but more than that, it has to be used to reduce energy consumption, so we would like to continue our effort towards that.”

The Innovation of the Year award was chosen by the public in an open vote.

Opened in 1970, Mayekawa’s Moriya Factory is the oldest of its three main factories in Japan. Its other two factories are located in the prefectures of Hiroshima and Nagano.

The 220,000-m2 (2.37 million-ft2) site houses around 1,000 employees and several factory floors where compressors, food processing robots, and refrigeration packages such as the NewTon system are manufactured. 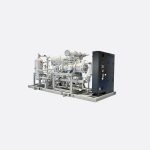