As heat pumps become increasingly seen as a decarbonization replacement for fossil fuel heaters, Mitsubishi Electric Trane HVAC US (METUS) has launched a CO2 (R744) heat pump water heater, the Heat2O, for commercial and industrial applications in select markets in the U.S., according to a report in Building Green.com.

Versions of Mitsubishi’s CO2-based heat pumps have been available overseas for more than 15 years, according to Cain White, director of commercial product management for Mitsubishi Electric Trane HVAC US, told BuildingGreen.com.

The METUS CO2 heat pump water heater joins other such technologies already in the U.S. market from Mayekawa and ECO2 Systems (formerly Sanden).

The air-source Heat2O has a COP of up to 4.11, according to Mitsubishi’s product website. It can produce hot water with temperatures up to 176°F (80°C) in one stage. The design is modular, and up to 16 units can be combined to allow for capacities between 40kW and 640kW.

It is capable of providing full capacity at 36°F (2°C) ambient temperatures, and can operate at outdoor temperatures down to -13°F (-25°C), while still providing the 176°F hot water.

The Heat2O is designed as a self-contained outdoor unit with scroll compressors and inverter technology. Each unit’s gas cooler has six spiral heat exchangers with a patented technology to maximize heat transfer, according to a product brochure from Mitsubishi.

The “three connected refrigerant pipes are wound around the twisted water pipe, which maximizes heat transfer,” Mitsubishi says about the spiral heat exchangers. “The continuous spiral grooves in the twisted pipe accelerates the turbulence effect of water and also helps to reduce pressure loss within the heat exchanger which contribute to enhance efficiency.”

The Heat2O also utilizes variable speed compressors and is equipped with built-in controls. This makes it capable of demand response, and thus capable of reducing stress on electrical grids during peak hours.

“With our product, a building can participate in load shifting,” White said. “It can potentially shed loads, reduce power consumption, increase capacity, adjust set points, or shut down.”

Mitsubishi currently has six CO2 heat pump pilot projects running in the U.S., including one for the Seattle Housing Authority’s Bayview Towers, where the Heat2O heat pump unit has replaced an old electric boiler, and provides hot water for three storage tanks of almost 1,000gal (4,546L).

The replacement is expected to reduce the building’s energy usage from 106kWh to 9.68kWh, according to Building Green.

“With our product, a building can participate in load shifting, it can potentially shed loads, reduce power consumption, increase capacity, adjust set points, or shut down.” 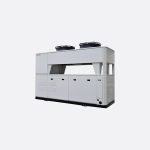