Plans to launch the higher-capacity cooling units were shared by Wolfe during a webinar on data center cooling with CO2, hosted by M&M Carnot on December 20, 2022.

The manufacturer’s Aquilon range, which is currently operational in “dozens” of data centers, includes computer room air-conditioning (CRAC) units that offer 52–168kW (14.8–47.8TR) in cooling capacity. According to Wolfe, a 275kW (78.2TR) unit will soon be available.

“There are hundreds of installations for data centers and other markets,” he added.

Wolfe attributed its popularity to several factors, including a low ODP and GWP, a smaller footprint compared to synthetics due to its higher heat capacity, comparable installation costs and potential energy savings.

In May 2022, M&M Carnot published a guide designed to help data centers transition from high-GWP refrigerants to CO2 cooling solutions.

According to the manufacturer, air-conditioning is responsible for roughly 30% of an average computer room’s energy consumption. However, with the adoption of its patented “Rain Cycle Free-Cooling,” users can reduce their energy use by up to 80%.

In this system, gravity is used to return the refrigerant to the evaporator, mitigating the need for a recirculation pump, which in turn saves significant energy.

In addition to energy costs, M&M Carnot’s free-cooling can reduce maintenance and service costs as well as eliminate refrigerant fees, the company said.

According to data shared by Wolfe in his presentation, a CO2 system can operate in free-cooling mode at lower ambient temperatures (-10–20°C/14–68°F) before moving into subcritical and transcritical operation as temperatures rise.

Wolfe noted that in regions where ambient temperatures are higher, an adiabatic gas cooler could help lower the amount of time spent in transcritical mode, which would reduce energy consumption and costs. 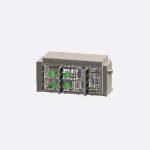