Evapco, a major U.S. manufacturer of heat transfer products, has introduced a new finned coil design, called the Ellipti-fin, which boosts thermal performance of closed-circuit coolers and evaporative condensers, improving efficiency by an average of 25%, the company said on Twitter.

The Ellipti-fin technology uses fins with an elliptical profile, rather than the round fins traditionally used. The elliptical profile allows for a greater water and/or air flow over the coils, while minimizing any pressure loss. In addition, Evapco products using the new Ellipti-fin technology have all rows of the coils finned, instead of just a few rows. Together, these innovations result in increased energy efficiency in both wet (evaporative) and dry operating modes, the company said. The technology also saves water when running in wet mode.

The results of the R&D process to develop the new Ellipti-fin technology has been published by Evapco in a white paper. During the process, Evapco looked at a number of parameters, including optimal fin profiles, height and spacing to maximize the heat transfer efficiency.

Anticipating that the cooling industry would query whether the heat transfer efficiency of the new elliptical fins would be inhibited by scale formation, Evapco carried out a laboratory test under conditions promoting the formation of scale. The results of the test are also included in the white paper.

The conclusion is that the Ellipti-fin is more resistant to the effects of scale formation than traditional coils when operating under similar conditions. “The Ellipti-fin heat transfer coil retains a higher percentage of its thermal performance rating with scale formation when compared to a bare tube Thermal-Pak coil,” the white paper says.

“The higher performance efficiency of this technology, when subjected to scale producing water chemistry, is due to the fact that as heat is transferred from the tube surface, to the fin and then to atmosphere, the fin surface temperature gradually diminishes from tube to the outer edge of the fin,” the white paper explains.

In addition to the eco-ATW and the eco-ATC, Evapco produces a wide range of chillers, including low-charge ammonia/NH3 (R717) units. The latest addition to the company’s line-up is the LCR-C air-cooled Evapcold chiller announced in December 2020. 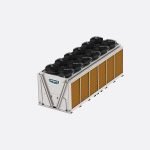 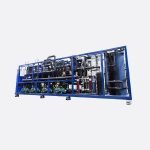