Japanese OEM Nihon Netsugen Systems will more than double its production capacity in 2023 with the construction of a new factory, which will open in Shiga, Japan, in March, according to Katsuhiko Harada, President of Nihon Netsugen. This expansion is designed to meet the demand for transcritical CO2 (R744) refrigeration systems in the region, which he said is growing year-on-year.

With the new facility, the manufacturer will be able to produce up to 250 units per year, up from 100.

To date, Nihon Netsugen has installed 410 of its transcritical CO2 condensing units at 140 projects in Japan, three in Malaysia and one in the Philippines. The majority of these installations have been at cold storage and food processing facilities, said Harada.

The company is also renovating part of its existing factory in Shiga to meet the increasing demand for its ammonia/NH3 (R717) chillers, which is largely being driven by the chemical and pharmaceutical industries, he added.

For end users looking for a natural refrigerant-based system that can offer up to 160kW (45.5TR) cooling capacity, Nihon Netsugen recommends CO2. Between that and 2,000kW (569TR), the manufacturer suggests ammonia, he added.

Harada largely attributed the uptake of R744 and ammonia in Japan to the Ministry of the Environment’s subsidy for natural refrigerant-based HVAC&R systems, which has supported many of Nihon Netsugen’s projects.

He also noted that Japanese end-user companies with U.S.- or Europe-based parent organizations tend to opt for natural refrigerants, particularly within the pharmaceutical industry.

To meet the growing demand for natural refrigerants in Southeast Asia, Nihon Netsugen is working with local partners in Malaysia and the Philippines, explained Harada.

This work includes supporting training and capacity-building in new markets.

The unit powers a walk-in cold room and the facility’s air-conditioning and will be used for training and demonstration purposes at the hub.

The CCI-Hub serves as the centralized platform for sharing technical resources, training and knowledge and facilitating stakeholder collaboration for the Global Partnership for Improving the Food Cold Chain in the Philippines project.

Harada will also be speaking at the Future of the Industry Conference at the CCI-Hub on January 24.

Nihon Netsugen will also be exhibiting its technologies at the Energy and Environment Exhibition (ENEX) in Tokyo, February 1–3, and the Supermarket Trade Show (SMTS) in Chiba, Japan, February 15–17. 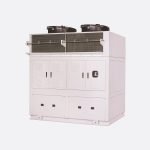