The new 40HP unit has been released alongside a new 30HP unit and a revamped range of top-flow type 20, 15 and 10HP units according to the company.

According to the company’s own data, the new models reduce installation costs by about 15% in comparison with the old models in standard medium-sized stores. This is due to a reduced number of piping systems needed. In addition, the new models also achieved energy savings of around 9%. 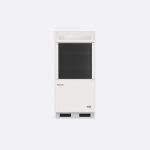