TEKO’s Orders Increased by 40% in 2021, But Fulfillment Lags

In 2021, German OEM and CO2 (R744) specialist TEKO’s order book has swelled by 40%, but the current global supply chain issues and lack of trained staff have delayed fulfillment and mean that TEKO “will not end up with a 40% plus at the end of the year.”

TEKO has  converted its production almost entirely away from f-gases. Just four years ago, they accounted for around 30% of the company’s turnover, but now they comprise only 5%. The majority of its natural refrigerant systems use CO2, though the company also produces ammonia and hydrocarbon products.

Meier noted that any orders taken as of September 2021 would be fulfilled next year, as TEKO’s production was currently “full up.”

Queried whether TEKO would scale up production to meet the increased demand, Meier said the company would like to, but that’s not something that can be done overnight because people need to be hired and trained – a process that takes at least a year. At the moment it is also hard just finding people to hire, Meier stressed.

Product performance will not be affected by this trend, Meier noted, but it will move towards increased focus on standardized products, meaning not every customer request can be fulfilled. “You will have to tell your customer, ‘If you want it like that, the delivery time is 16 to 18 weeks; otherwise you are at eight weeks,’” Meier said.

The fulfillment issues stem from shortfalls of materials and components. “There is a shortage on some components, but that has nothing to do with natural refrigerants really,” Meier noted. “There’s just a shortage on the whole market, and it is everywhere.” One of the areas particularly affected by this is the controls market, which is having a “tough” time, according to Meier.

TEKO also sees material prices rising for metals and other deliveries, due to the ongoing COVID situation, Meier added, citing price hikes of around 10% on components, 10-15% on heat exchangers and up to 25% on steel. The rising prices on materials and components also mean that TEKO has been forced to increase its own prices to maintain profitability.

“We hope that the price will go down by the middle of next year, but before that I don’t see a big problem,” Meier said.  He believes the biggest problem for customers would not be possible price hikes, but rather getting deliveries back on track.

“There is a shortage on some components, but that has nothing to do with natural refrigerants really, there’s just a shortage on the whole market, and it is everywhere.”

In general, Meier is positive about the future of the natural refrigerants industry, seeing lots of new investments and companies being bought up by big players. Europe is still the leader in natural refrigerants, but it is a growing industry, and it is spreading all over the world, he said. European companies can make good money on their experience by exporting their knowledge to the rest of the world, as TEKO has.

The change from “dirty cooling” to “clean cooling” using natural refrigerants came not just from TEKO’s own desire to deliver more environmentally friendly and future-proof solutions, but also from end users’ requesting these solutions as long as 10-12 years ago, Meier explained. He mentioned German discount retailer ALDI as one of those that took an early interest in natural refrigerants.

Looking to the future, Meier sees air conditioning as the next growth area for natural refrigerants. He also thinks that the really big players are waking up to the need for change, with the EU F-Gas Regulation and most likely the updated EU REACH chemicals legislation presenting a “double squeeze” on the continued use of f-gases. 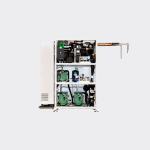