German OEM TEKO Refrigeration has introduced a patent-pending heat exchanger, the TECO2nditioner, which is designed to reduce the suction and discharge temperatures of medium-temperature compressors in its transcritical CO2 booster systems. This in turn lowers and stabilizes oil temperatures, maintaining lubrication and extending the lifetime of the compressors.

The TECO2nditioner, unveiled at the Chillventa trade show in October, was explained by Andreas Meier, Managing Director of TEKO Refrigeration, at the ATMOsphere (ATMO) Europe 2022 conference. Held November 15-16 in Brussels, Belgium, ATMO Europe was organized by ATMOsphere, publisher of R744.com.

The TECO2nditioner has already been implemented in specialty supermarkets. It is being designed for all of TEKO’s transcritical CO2 booster systems except for very large applications.

The idea for the TECO2nditioner developed as TEKO kept seeing CO2 compressors in supermarkets with low oil lubrication and broken parts, and wanted to know why this was happening. One reason, Meier said, is that some systems were “overdesigned” for capacities that were higher that needed on the medium-temperature side, resulting in a higher compressor cycle rate. He noted that the suction (inlet) gas temperature also could reach 35°C (95°F), with a discharge temperature of 140°C (284°F), “which is already on the limit of the compressor,” said Meier.”

“We reach a very optimal suction gas temperature all across the year,” said Meier. “The compressor [operation] is very smooth and in perfect condition. It’s not stressing too much.”

In general, said Meier, the TECO2nditioner eliminates the need for a desuperheater, post liquid injection, additional controls and hot-gas dump. “Heat remains in the system, and there is a slight increase in efficiency,” he added. The result is “lower costs, less complexity and higher reliability.”

During his presentation Meier showed a chart indicating the variable discharge temperatures typically seen, which can exceed 140°C, vs the 100°C (212°F) stable temperature achieved with the TECO2nditioner. The chart also showed that suction superheat normally varies and requires post liquid injection to reduce the temperature, whereas the TECO2nditioner enables the superheat to stay around 10°K.

In another chart, Meier showed the normal variability of oil temperatures, which could exceed 90°C (194°F) or 100°C, a level that would prevent lubrication. The TECO2nditioner maintains a stable oil temperature of around 60°C (140°F), he said. “This keeps the system alive for a long life.”

Meier mentioned that the TECO2nditioner is “just one step” and can be combined with energy-enhancing technologies to “reach even higher efficiencies.” 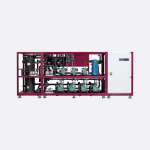